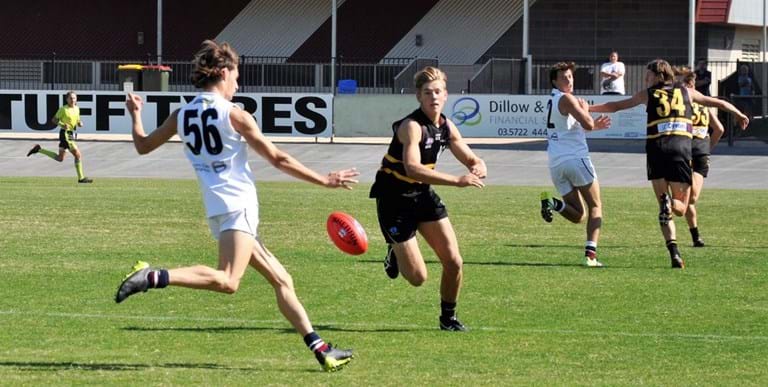 After leading by 19 points at the first change and kicking the first goal of the second quarter, the newlook Dragons struggled to maintain their consistency with the Bushrangers piling on the next 13 goals.

Despite Sandringham kicking the last three goals of the third quarter to cut the margin back to 36 points at the final break, an eight-goal-to-two final quarter sealed the Dragons’ fate.

“Our offence was really good in the first quarter, getting outside and creating overlap, especially going inside 50 I thought we were really quite damaging,” Dragons assistant coach Jackson Kornberg said.

“In the second quarter, I thought our midfield was comprehensively beaten with our spread and our clearance work.

They’re a strong contested side and they were able to win majority of clearances and get the ball moving forward.

We made a lot of basic skill errors with the footy and that resulted in a lot of turnovers and giving Murray the opportunity to score.”

The Dragons made 16 changes due to the start of the APS/ AGS school football season.

Debutant Jackson Hannah received the coaches’ award after a damaging game in the forward line where he kicked 3 goals, amassing nine disposals and taking three marks.

“(He) came in today, playing his first game and was able to kick three goals and I thought he was really a quite damaging forward,” Kornberg said.

“He provided us with a really good option forward and I think he will be a positive coming out of today and certainly for the rest of the year.”

Kornberg said it had been great to see the growth of Hanrahan over the start of the season.

“(He came in) this season as a defender and then got the opportunity with the Vic Metro game last week to play a bit more forward.”

“Today he started terrifically in the first quarter, (he was) really dangerous as a small forward who could also prove that he could hit up and take some marks,” he said.”

The Dragons face the Western Jets on Saturday, April 28 at Trevor Barker Oval.