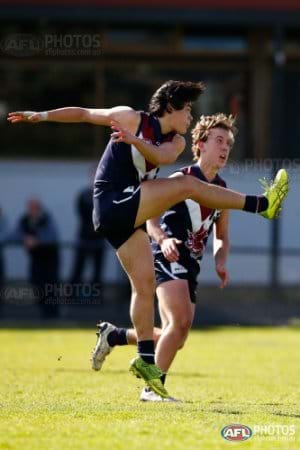 The Sandringham Dragons gave up a three-goal lead to go down to the Eastern Ranges by seven-points at Box Hill City on Oval on Sunday and end their five game winning streak.

The Dragons led by 18-points at the 11-minute mark of the third quarter before the Eastern Ranges stormed home in blistery conditions to win their fourth consecutive game.

The first half provided a close contest with both teams going goal-for-goal resulting in scores tied at 3.5 (23) apiece at half time.

Sandringham played much of the third quarter on their terms before the Ranges responded with four consecutive goals to take an 11-point lead into the final quarter.

The Dragons looked out of sorts in the final term before two goals from lively small forward Aaron Trusler gave Sandringham some hope. However, the Dragons couldn't equalise with the Ranges towards the end of the game with Eastern proving too strong in defence.

Will Walker continued his impressive run of form being awarded the Fin Fitness best on ground player after gathering 31 disposals, seven inside 50s and two score assists.

Debutant Ed Newman was awarded the Sportsmart coaches award after a solid first game in the midfield saw him gather 20 disposals, 10 clearances and two inside 50s.