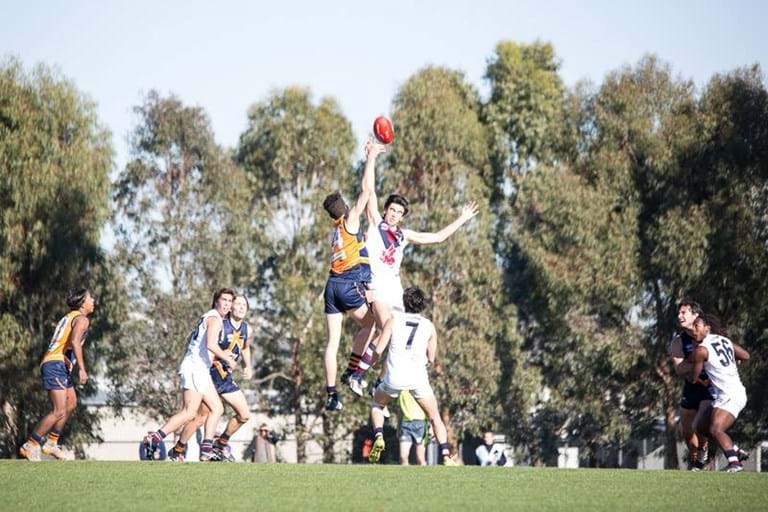 Sandringham Dragons have run home 35-point winners after a second half comeback against the Calder Cannons on Saturday for the first game of TAC Cup’s Futures Rounds.

The Dragons controlled much of the play in the first quarter leading by 12 points at quarter time before a four-goal-to-two second quarter from the Cannons saw them take the lead at the main break. A half-time rev up from coach Jeremy Barnard proved beneficial with the Dragons piling on six of the next seven goals to set up their sixth win of the season.

Senior coach Barnard said he was pleased to see the Dragons respond after their half-time “bake”.

“It is pleasing for us to be able to turn it around,” he said post match.

“The older players really got going after half time when they were challenged.”

The Dragons forward half pressure in the second half set up the win, finishing the game +8 in front-half turnovers, a stat Barnard said reflected strong defensive pressure.

Talent manager Ryan O’Connor said he was pleased to see the clubs leaders leading from the front when the group was challenged on the scoreboard.

“They showed the younger boys what they need to do when it gets tough … footy is tough, they try to beat you, so really well done,” he said.

Barnard also had praise for the bottom-agers who had stood up to the challenge of playing TAC Cup football with Sandringham debuting over 31 players this season.

Despite the comfortable win Barnard said the challenge the Cannons presented in the second quarter showed the Dragons had some significant work to do over the next couple weeks.

When the playing group needed a backline general after an onslaught of Cannons goals in the second quarter, Max Lohan stood up gathering 21 disposals and four marks.

Ruckman Josh Gibbins was awarded the Fin-Fitness Coaches Award after recognition for his continued development over the course of the season.

Jeremy Barnard said he was proud to see ‘significant improvement’ from Gibbins over the past four weeks. Gibbins dominated the stoppages gathering 31 hit-outs alongside his five tackles and three marks.

The win moves the Dragons into the top four and has them well versed to face top-of-the-table Geelong Falcons (9-1) on Sunday at Trevor Barker Oval.