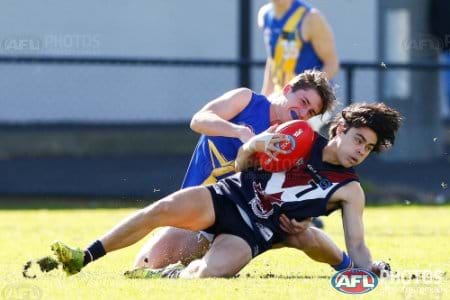 The Sandringham Dragons have fought off a gallant Western Jets outfit to run home 30 points winners in turbulent conditions at Frankston Oval on Saturday.

The Jets, who came into the match having won only three matches from 13 outings, tested the Dragons resilience and never-say-die attitude taking a 5-point lead into the final quarter.

Three last quarter goals from Sportsmart’s best on ground player Will Walker led the Dragons to a triumphant victory.

Fresh off his invite to the NAB AFL Draft Combine, Walker played with a high level of confidence, amassing 30 disposals, nine clearances and five marks to consolidate a well-rounded display.

Bottom-ager Bailey Smith looked at home with a move into the midfield gathering a game-high 44 disposals, 13 inside 50s, 10 clearances and four rebound 50s. Smith, a product of Xavier College, is eligible for the 2018 draft.

Small forward Aaron Trusler was awarded the Fin-Fitness coaches award after a return to form saw him kick four goals, three of which were in the second quarter to put Sandringham in front.