Dragons turn off the Power at Casey Fields 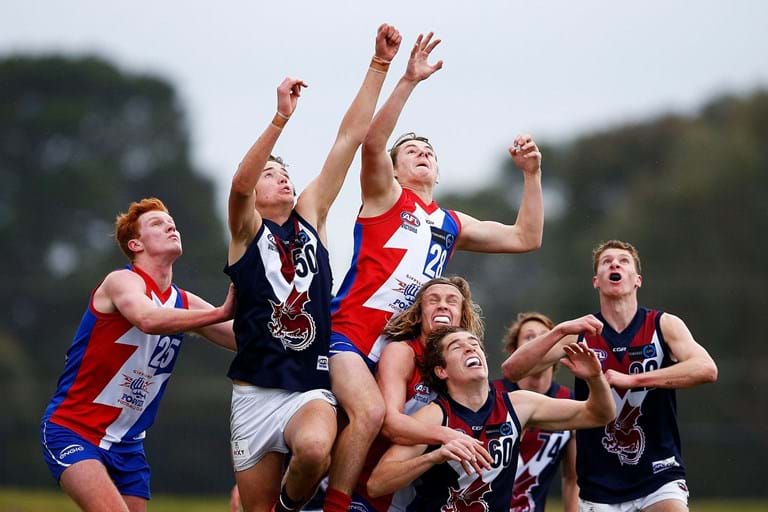 The Sandringham Dragons found a late spark to storm home against Gippsland Power on Saturday, clinching a one-point win in wet and windy conditions at Casey Fields.

The Dragons, who had previously kicked two goals for the game, scored three goals within five minutes to run home winners 5.3 (33) to 4.8 (32).

Competitive, hard-fought football played by both sides left the game wide open until the dying minutes of the match when goals to Alfie Jarnestrom, Kai Owens and a contentious free kick to Max King saw Sandringham take the lead.

The Dragons struggled to effectively convert their opportunities in the dismal weather, dominating disposals 394 to 272 but only being able to move the ball inside 50 38 times.

Despite the Dragons disposal dominance Gippsland led for majority of the match. However, Sandringham’s defensive pressure ensured the Power struggled to capitalize on their 45 entries inside 50, resulting in only four goals.

Post-match the Dragons coaching staff had a key message for the boys: to enjoy the four points but not be satisfied with the way it played out. Dragons senior coach Jeremy Barnard said the group had a number of key aspects to work on before next weeks match but close wins help the group grow.

Returning from injury Alfie Jarnestrom was awarded the Sportsmart best on ground after an impressive first game back which saw him gather 27 disposals, 11 clearances, six tackles and the goal that set the Dragons final five minutes alight.

Reliable defender Geordie Nagle was again rewarded for his effort and abilities with the Fin-Fitness coaches award. Nagle continued his superb run of form as a pillar of the Sandringham defensive unit with 30 disposals, nine tackles and nine rebound 50s.

Assistant coach Mick Lovejoy was full of praise for Nagle’s hard work saying he consistently requests feedback in an effort to improve himself as a player and commit himself to the Dragons in the best way he possibly can.

Sandringham, who will have a full squad to choose from with Vic Metro and APS commitments fulfilled, will face Bendigo Pioneers (3-9) on Saturday at 2pm at Trevor Barker Beach Oval.