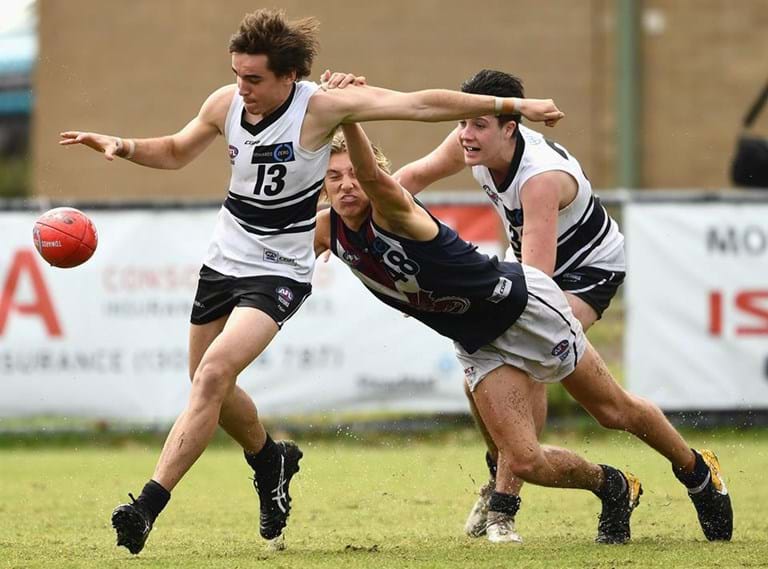 37 disposals to Sandringham Dragons captain Bailey Smith helped Sandringham to a controlling 45-point win over the Northern Knights on Saturday.

Inaccurate kicking put the Dragons under pressure with them unable to put the game away until the third quarter where a 2.5 (17) term gave them a 26-point lead heading into the final change.

Despite Sandringham winning comfortably, coach Jeremy Barnard said it was important for the team to remain grounded.

“I thought out effort was outstanding, I thought we really played Dragons pressure and we were hard to play against … there is no doubt about that,” he said post-match.

“There were some outstanding efforts today, the group was challenged pre-match with some late outs.

“We had nine bottom agers and in my time, we have never had more than three at this time of year (playing) … for round one to have so many bottom agers come into the side and play well is fantastic for our program.

“Overall, for a round one game I thought it was really solid and this corresponding game last year took us until the last 15 minutes to win it … we really had control most of the game.”

Debutant Joshua Worrell was awarded the coaches award post-match after his 13 disposals, two inside 50s and goal.

“We understand that when you first come into TAC Cup footy it takes a while to find your feet … but today we thought he was pretty impressive for us as deep-forward,” Barnard said.

Talent manager Ryan O’Connor said Worrell’s game was highlighted by his “overall competitiveness and ability in a contest to bring the ball down.”

Captain Bailey Smith was named the best player after gathering  12 clearances, eight inside 50s, seven tackles, and four marks to go with his 37 touches.

Barnard said Smith had taken the captaincy in his stride.

“I thought (he) really lead from the front and got stuck into the contest … he won a number of stoppages and his leadership has been outstanding so far.”

Smith said post-match that he was proud of the boys to come out firing in the first game of the season.

“I’m really rapt with our efforts today. We emphasised before the game how long we have worked for this day for and not wanting to have too many regrets,” he said.

“I’m really proud of everyone and the bottom-agers for stepping up (to the level of TAC Cup footy).”

Sandringham will now face the Oakleigh Chargers on Saturday at Avalon Airport Oval from 1:30pm.