Girls ready to take their chance 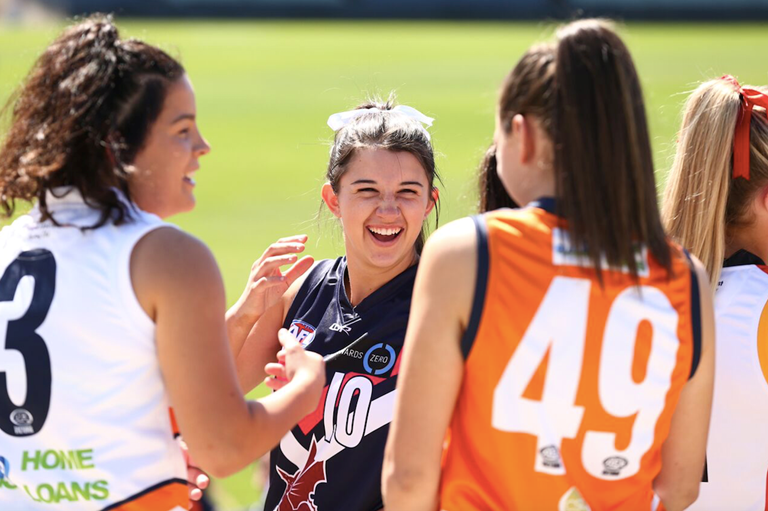 The competition, which consists of 12 teams based throughout metropolitan and regional Victoria, is a major step forward for women’s sport at the grassroots level.

According to Leann the introduction of the competition is fundamental for developing skills to allow these girls to reach the “dangling carrot” of the AFLW competition.

“When you start at grassroots and don’t have to worry about winning you can actually teach these girls to kick a footy and mark in their hands … that’s fantastic,” she told Dragons Media at the girls jumper presentation night.

The competition will allow the players involved, some who have been playing for as little as a few months, to boost their talent and give them an opportunity to reach the top tier of AFL. Dragons captain Isabel Quintal is one girl who is relishing in her opportunity to play at the elite under-18 level.

“I used to be a little kid and would think about being drafted out of raw talent having not played football at all,” she said.

“Now that I have been given the opportunity it’s just great … I am going to keep working hard and hopefully play.”

For Quintal, the competition is also a chance for her to make her dad proud.

“I look up to my dad, he wasn’t a big football player or anything like that but he was always one to kick around the footy with me,” she said.

“He is very caring and he loves watching me play … we have really bonded over it and he really cares about my game.

“He comes to every match, hanging around the sidelines so he can tell me what to do … he loves bossing me around.

“I would love to be half of what my dad is,” she said.

As a playing group the Dragons set themselves a team mantra to follow for their inaugural season. During a one-day leadership camp during the pre-season the team acknowledged a mantra after identifying what people from outside the group may think of them and what they think of themselves.

“The three words we came up with were brave, committed and united,” Leann said.

“I like the word brave, its about playing brave football, its about if you’re getting your butt kicked at one stage to lift your heads up … that’s the mantra the girls want to follow.”

Quintal said a key focus for the entire playing group was to work as a team.

“We are a young side but we are fast and explosive,” she said.

“We work as a team, we aren’t individuals … we want to come across as united and competitive.”

Leeann echoed Quintal’s sentiments saying one of the mains goals for inaugural season was to get the girls closer as a group.

“Half of Sandringham and Oakleigh chargers basically split [to form this competition] and so the we are starting with a brand new group.

“ I think pre-season and off-field is about developing relationships so that you feel like you are doing it for each other.

“We have actually started that process already,” she said.

A 5-woman leadership group voted by the playing group will support Quintal. Georgia Ricardo, Jemma Owen will be vice-captains with Maddi Wilson and Sasha Long making up the team.

The Dragons begin their 2017 season this Sunday against the Murray Bushrangers.