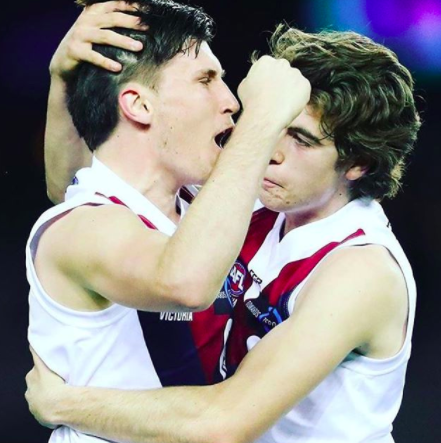 The Geelong Falcons have won their first TAC Cup premiership in 17 years after they defeated the Sandringham Dragons in a grand final thriller at Etihad Stadium on Sunday night.

The Dragons started the game slowly with the Falcons piling on the first three goals of the game before small forward Aaron Trusler put Sandringham on the board and into the game. At quarter time Sandringham were just three-points down, with late goals to Hayden McLean and Hamish Brayshaw keeping the Dragons in it early.

The quarter time message from the coaches, for the boys to keep playing their brand of Dragons football with a never say die attitude, resonated with Sandringham as they burst out the blocks in the second quarter to pile on four of the first five goals and take a healthy 20-point lead into halftime.

With the game on the line, the Falcons came out firing in the third quarter, keeping Sandringham scoreless and kicking eight goals of their own. 2017 AFL Draft prospect Gryan Miers asserted himself as one to watch come November’s draft kicking four of his seven goals in the premiership quarter.

In true Sandringham Dragons fashion, they entered the fourth quarter giving their all to bring the cup home. Kai Owens was prolific up forward kicking three clutch goals to give Sandringham hope with 10 minutes remaining. The last 10 minutes of the quarter was a scramble with neither team able to impact the scoreboard and close out the game. In the final passage of play, the Dragons had a shot for goal but missed, handing Geelong their first premiership in 17 years and Falcons coach Daniel O’Keefe the premiership in his first season at the helm.

Gryan Miers was named best on ground his seven goal and 16 disposals outing, whilst Sandringham ruckman Joel Amartey was named the Fin-Fitness best-on-ground for the Dragons after dominating the ruck contests with 27 hitouts, to go with his 11 disposals, six tackles and four inside 50s.

16-year-old Bailey Smith was also prolific for the Dragons across, gathering a team-high 25 disposals, six tackles and five rebound 50s.

Midfield Andrew Brayshaw continued his strong finish to the season being named the Sportsmart coaches player after gathering 21 disposals, a game-high 10 tackles, six marks and four inside 50s.

The coaching staff emphasized post match how proud they were of the Dragons efforts in the grand final and over the season irrespective of not quite getting there, saying the way the boys competed to the end and were able to handle themselves under adversity whilst upholding the values of the Dragons was a testament to who they are as young men.