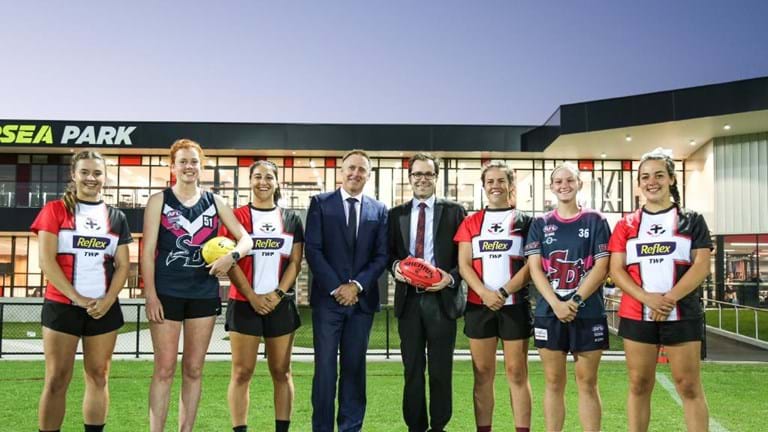 Jemma Owen comes from a strong footballing pedigree; her late father, Kevin Owen, played and coached in Melbourne’s southeast and her uncle Mick, was a former champion for Oakleigh in the VFA.

But at 17, Jemma holds her own – at 14 she kicked a bag of 16 goals for Highett, after four years at the Sandringham Dragons she was named captain for the 2018 season and more recently made her debut in the VFLW for the Southern Saints.

Jemma credits her family, in particular her father with whom she shared a close bond, for her passion for football.

“I started playing AFL because of my dad,” she said.

“He was definitely my role model when I was a kid. He coached and played over 500 games.

“Ever since I can remember I used to go down to the ground with him, watch all the boys run out, kick the footy and from (that moment) I knew that’s exactly what I wanted to do.

“My mum has also been a massive contributor … I couldn’t have gotten this far without her either.”

Playing under AFLW player Katherine Smith and Southern Saints VFLW player Isabel Quintal over the past two years enabled Owen to be well-prepared to take on the captaincy.

“It was an amazing honour to be named captain this year … I’ve loved every bit of it,” Owen said.

“Being captain has added a different element and challenge to my game, which I’ve loved.”

After training with the Southern Saints as part of the Dragons pathway program earlier in the season, Owen was named on their list for the revamped VFLW season.

“I was very honoured to be named on the VFLW list for the Southern Saints,” she said.

“They have a really good culture down there and the opportunity is amazing … to be called back to be on their list, that was a dream come true and something that really meant a lot.”

A reward for her stellar season in the TAC Cup, Owen was named as part of the Vic Metro squad to compete in the National Championships in June and July.

“The standard at Vic Metro is really impressive,” she said.

“There are so many talented girls in the program this year. I was very fortunate to be selected and very grateful for it.”

Despite the AFLW and VFLW growing rapidly, Owen has her sights set on finishing year 12 at McKinnon Secondary College and aiming towards a Bachelor of Teaching.

“Obviously footy is a very big thing in my life but school is very much a priority,” she said.

“Footy will always be there.”