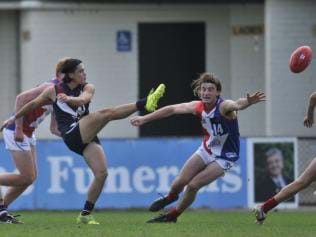 A lacklustre performance from the first bounce handed the Dragons their first loss of the season. A game riddled with errors resulted in the Dragons inexperienced side unable to capitalise when in possession of the ball.

Gippsland kicked the first three goals of the game before goals to Ari Sakeson, Will Walker and Jacob Bakes shifted the Dragons into gear.

After quarter time the Power pulled away, able to outsmart and outplay the Dragons in every aspect.

A two-goal-to-one third quarter allowed Sandringham to remain within reach of a win heading into the final break.

They appeared to be caught off guard in the final quarter as Gippsland piled on eight unanswered goals to dismantle Sandringham's structure and style of play, securing their second win of the season.

The Dragons were unable to maintain possession during the game and struggled to play cohesive, team football compared to past weeks.

Coach Jeremy Barnard told the Bayside Leader that there were no excuses for the side’s poor performance.

“Credit to them (Gippsland), they put us under a fair bit of pressure,’’ he said.

“They made it a real slow, inside game. They also put a lot of pressure on the ball carrier and we weren’t able to handle it.”

He said the Dragons would use the loss as a learning experience for the players.

“A few people got exposed yesterday but it’s all about teaching and learning and improving.’’

Montanaro was named best on ground for the second time this season after a solid four-quarter performance amassing 26 disposals, nine marks, seven tackles, four rebound 50s and three inside 50s.

The Dragons take on the Bendigo Pioneers (1-4) next Sunday at 2pm.