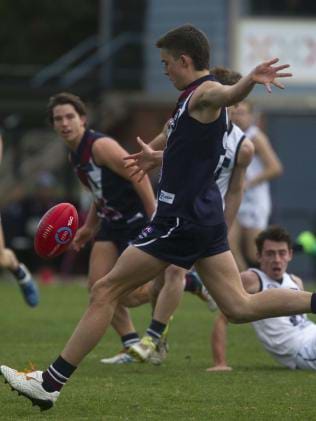 Sandringham were bolstered by the inclusion of 17 players from the previous week, with a number of boys returning from their APS/ AGSV sporting commitments.

The Dragons, who debuted five players in game two of Futures Rounds, piled on the first seven goals before Hayden Elliot put the Falcons on the board.

In what was arguably Sandringham’s strongest display for the season, they were able to restrict Geelong to just seven scoring shots from 45 inside 50 entries, their lowest in a match, lowering the previous record set against the Dragons in 2014.

The Dragons dominated the key statistics controlling disposals (454-244), kicks (209-139) and marks (88-48) but failed to make an impression on the scoreboard. However, despite controlling the ball Dragons coach Jeremy Barnard told the Moorabbin Glen Eira leader he felt “flat” about the win.

“I think we had over 450 possessions so we should have been looking for something like an 18 or 19-goal effort. So we are not entirely satisfied.’’

Small forward Lachie Harris and Isaac Morrisby kicked two goals apiece on their return game for the Dragons with Sandringham’s forward line proving too strong for the Falcons defense.

Angus Styles was adjudged the Sportsmart best on ground after an impressive performance upon return from Vic Metro duties. Styles gathered 33 disposals and proved too much for the Falcons midfielders with 25 uncontested possessions.

Ruckman Joel Amartey was presented the Fin-Fitness coaches award after a controlling performance in the ruck where he gathered 28 hit outs to go along with his 19 disposals.

The Sandringham Dragons will now face Gippsland Power (4-7) on Saturday July 8 at Casey Fields looking to avenge for their round five loss.