Dragons surge continues with win over the Knights 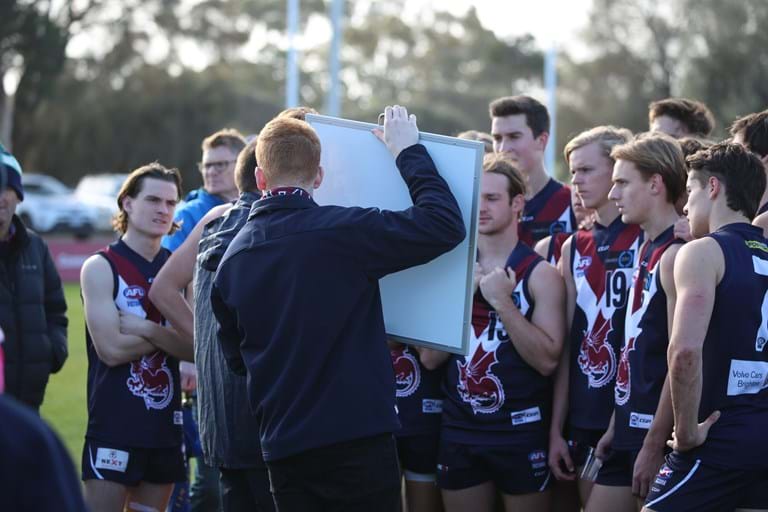 Northern came out of the blocks stronger than Sandringham in the first term, controlling the play and leading two goals to one at quarter time despite inaccurate kicking at goal.

However it was all Sandringham following the first break, taking control of the midfield and playing the game in their forward half for the majority of the contest to run out 27-point winners.

Windy conditions at the Trevor Barker Oval made goalkicking difficult for both sides, resulting in a low-scoring affair decided by the stoppage ascendency gained by the Dragons after quarter time.

Hugo Ralphsmith kicked Sandringham’s first two goals to keep them in the game early, before goals from Grey, Denborough and Houlahan took the game away from Northern through the middle stages of the match.

“Our stoppage work really improved after quarter time…It makes it a lot easier when you’re not overusing the ball leaving stoppages and you get six v six in the forward line,” Dragons assistant coach Jackson Kornberg said.

A few selfless moments of magic from small forward Troy Brimble as the game wore on proved significant in difficult conditions for creativity, complimenting the impressive display from midfield trio Harry Houlahan, Liam Stocker and Alastair Richards who relentlessly willed the ball forward.

Houlahan was named best afield after illustrating his ball-winning ability and composure in possession, amassing 25 disposals, five marks, seven tackles and a goal.

“I think he’s been building towards a game like this,” Kornberg said.

“His work inside at the stoppage and ability to get out and spread showed he can be a dual-threat midfielder.”

Bottom-age talent Fischer McAsey had a breakout performance as a relief-ruck, competing hard and providing a strong presence around the ground.

McAsey’s aerial ability and aggression at the contest was hugely influential throughout, a performance the coaching staff labelled “outstanding”.

“He played as a relief-ruck and we saw his follow up work and his presence around stoppages…we just can’t wait to see how he’ll develop as a key forward and ruck,” Kornberg said.