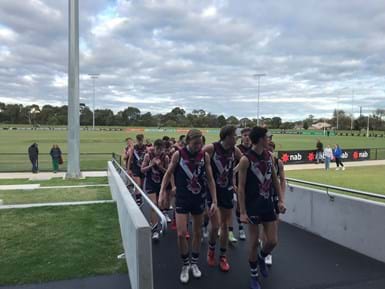 In a tense top-four clash in round seven of the NAB League Boys it was the Eastern Ranges who prevailed over the Sandringham Dragons, winning 8.7 (55) to 6.10 (46) in Moorabbin.

It was just the second national U18 boys game held at St. Kilda’s redeveloped spiritual home, now known as RSEA Park, and the contest certainly lived up to the billing.

Sandringham seemed to have found their mojo in the first quarter with fluent ball movement and defensive intensity leading to opportunities for their crafty forwards, as Angus Hanrahan’s beautiful finish put the home side 13-points clear in the dying stages of the term.

But it was a different tale from that point on. Eastern’s pressure lifted multiple notches after quarter time, limiting the Dragons’ ability to move the footy with purpose and effectively shutting down the game.

Two goals apiece in the third term set up a thrilling finish in front of a healthy Moorabbin crowd with Sandringham taking a 4-point advantage into the last.

Missed opportunities in front of goal cost the Dragons dearly in the opening five minutes of the final term as the Ranges seized momentum from that point on with two clutch goals to run out deserved winners.

Sandringham assistant coach Jackson Kornberg was most impressed with the Ranges’ “terrific pressure around the ball” handicapping their ball movement.

“There’s plenty to work on going into Bendigo next week up in Echuca but we’re really looking forward to the challenge. We’re going to have some changes again through the nature of the program but it’s really exciting because it gives other guys opportunities,” Kornberg said.

Midfielders Miles Bergman (18 touches and a goal) and Ryan Byrnes (28 touches) battled stoically in the tussle and were major reasons the Dragons remained in the contest until the final siren.

“I reckon Miles Bergman had his breakout game for the year. It mightn’t have been a massive disposal game but I thought he influenced and damaged with his disposals, was strong in his aerial contests and fantastic when he was able to run and carry and hit the scoreboard early.

“Ryan Byrnes is just continuing a terrific start to the year. He gives us really good drive out of stoppage. I thought his pressure and defensive mindset was probably the best he’s had all year which is a credit to him and his focus in that area,” Kornberg said.

Kornberg also praised key-forward Kyle Yorke’s ability to work hard up the ground and chain the ball forward. Yorke finished with 20 touches, 10 marks and two goals in a superb performance.

Angus Hanrahan continued his strong NAB League form with another goal to go along with his 27 disposals and nine marks.

Sandringham now sit fourth on the ladder with a 4-2 record ahead of their round eight clash with Bendigo in Echuca on Saturday.