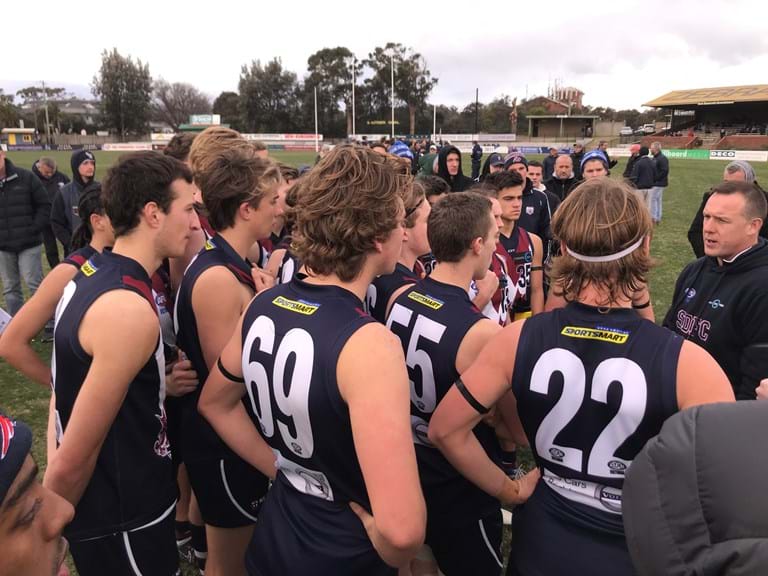 The Sandringham Dragons have prevailed in blustery conditions at Trevor Barker Oval against the Bendigo Pioneers, winning 6.12 (48) to 6.4 (40) in round 13 of the TAC Cup.

A dominant first quarter in which Sandringham kept Bendigo scoreless whilst kicking 3.5 themselves set up the gruelling victory, proving a margin too great for the away side to overcome.

Bendigo did hit back however, slotting three consecutive goals after half-time to cut the margin to a single kick before the Dragons steadied through Jai Florent’s second goal of the contest.

The two sides then played out a goalless arm-wrestle in the final term, with skills becoming increasingly difficult to execute through strong winds as the ball started holding up in the breeze almost comically at certain stages.

“We significantly dominated the first half, I was really happy with our game-style which is a credit to the coaches and players with guys coming in and playing the Dragons way straight away,” Dragons coach Jeremy Barnard said.

“Third quarter we went away from what we did really well but one thing the Dragons are good at is when the pressure’s on and it’s a real battle we dig in.

“(The last quarter) was really pleasing from my point of view, we really dug in.”

“Stock’ played a magnificent game, worked really hard in-and-around and using his leg speed to break away from stoppages, he’s in a rich vein of form,” Barnard said.

Ryan Byrnes also starred through the midfield as Stocker’s right-hand-man, carrying on his strong month of football with another 26 disposals.

“He’s pretty much cemented himself into the midfield, his work in the stoppage and the scrimmage has been first class,” Barnard said. Assistant coach Jackson Kornberg added: “You wouldn’t be able to tell he’s a bottom-ager as he doesn’t look out of place in the midfield.”

Sandringham’s young defence held off many Pioneers attacks throughout the game, reading the ball in flight despite the conditions and generating offence from the back half.

“He’s (Cowden) a versatile prospect as a bottom-ager who’s going to be really exciting for us, he shows a real good ability to read the ball, intercept then run off,” Kornberg said.

“Watts is having a tremendous year, he’s well beyond his years effectively leading our defence as a bottom-ager.”

Sunday’s victory was the fifth-straight for the Dragons in the TAC Cup, improving their record to 9-4 and ladder position to fourth.

Sandringham’s next game is against Eastern Ranges on Saturday, August 4 at Box Hill City Oval.